I had just plopped down in a front-row, sweet-spot seat for what was about my 20th room of the day at the California Audio Show.

Drawn in by the sight of two huge speakers, I was squinting at the product signs to figure out just where I was when another attendee barged in.

A well-dressed, silver-haired gentleman in the corner seat of the back row rolled his eyes. His associate, who was standing, said in a crisp British accent, “No, we’re Linn Audio Loudspeakers, out of Oakland, California.”

“There’s not even anyone named Linn at the UK company,” grumbled the older man in the back row, almost inaudibly, as if this was about the thousandth time he’s been through the same conversation.

The clueless patron turned on his heel and left. I refocused my attention on the mammoth boxes in front of me. From what I was seeing – two large woofers stacked on top of each other, augmented by a horn just as big – my instincts were warning me this wasn’t going to be promising.

Then the British man cued up Diana Krall. I used to be a hard-core fan, but overexposure – particularly at audio shows – and the whole Elvis Costello thing kind of dragged me down. The second her honey-and-whisky voice poured from these speakers on “Deed I Do,” however, I was enchanted again. All is forgiven, Diana.

The sound through the Linn speakers was smooth, polished and detailed. The midrange had an almost electrostatic clarity, allowing Krall’s alto to soar in its own space while her band vamped around her. The musician’s piano also came through with amazing tone and authority, the way I remember it the dozen times I’ve heard her live.

The track finished and I offered my own disc to the English fellow. “Let that one play,” came the voice from the back row, still noticeably irked by the name incident.

“This will be fine, David,” said the British man, who turned out to be Peter Lee, Linn’s international marketing director.

“David” turned out to be somebody who actually is named Linn, as in the owner of the company and chief designer.

Linn put his head in his hands until the song started with a piano flourish and guitar chord. It was Donald Fagen’s “H Gang,” which had become my go-track for the day to compare systems.

Even Linn brightened up. “People have brought some horrible stuff in today,” he said as a grin finally broke out on his face. I suddenly felt the ice melting.

I turned back toward the front of the room and concentrated on the Fagen track.

As you might imagine from speakers so large, the sound filled the room. Yet, despite all those woofers pumping at once, the bottom end didn’t sound overloaded. They also exhibited a good sense of pace. This could be one of those rare systems where the lack of gain from an active linestage didn’t also reduce heft and impact. 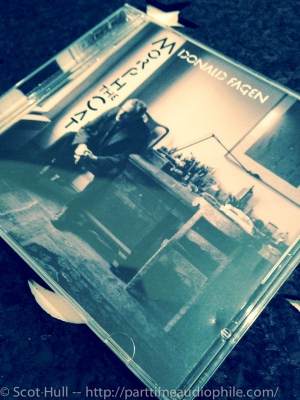 Switching to my No. 2 demo cut, the DJ-only CD single remix version of the Cowboy Junkies’ “Rock and Bird,” I was impressed with the Lyceum’s handling of acoustic instruments. Guitar and mandolin emerged with little smearing, and longtime accompanist Jaro Czwewinec’s accordian sounded lovely.

There were moments when I thought I did hear a tiny bit of coloration from the horn, but it wasn’t distracting. And the tradeoff seemed to be plenty of air, a deep soundstage, realistic image height and good microdynamics. Overall, the Lyceums produced a sound that enveloped and caressed you, rather than trying to knock you down.

“How do you get such a nice midrange?” I asked Linn, as the Cowboy Junkies track finished.

“The compression driver has a lot to do with it,” Linn said. “I tried dozens before I came up with this one.

“One problem with horns is that if you use wood or aluminum, the material is too hard and you get distortion. I found a polymer that is soft on the inside and hard on the outside. It minimizes those issues.”

For those who want to give the speakers a try, Linn offers free shipping and a money-back guaranty.

I’ve always been partial to big speakers (nine-foot Sound Labs, anyone?), but too often their performance fails to match their presence. Not so with Linn’s gentle giants. They’re something to blow your horn about. 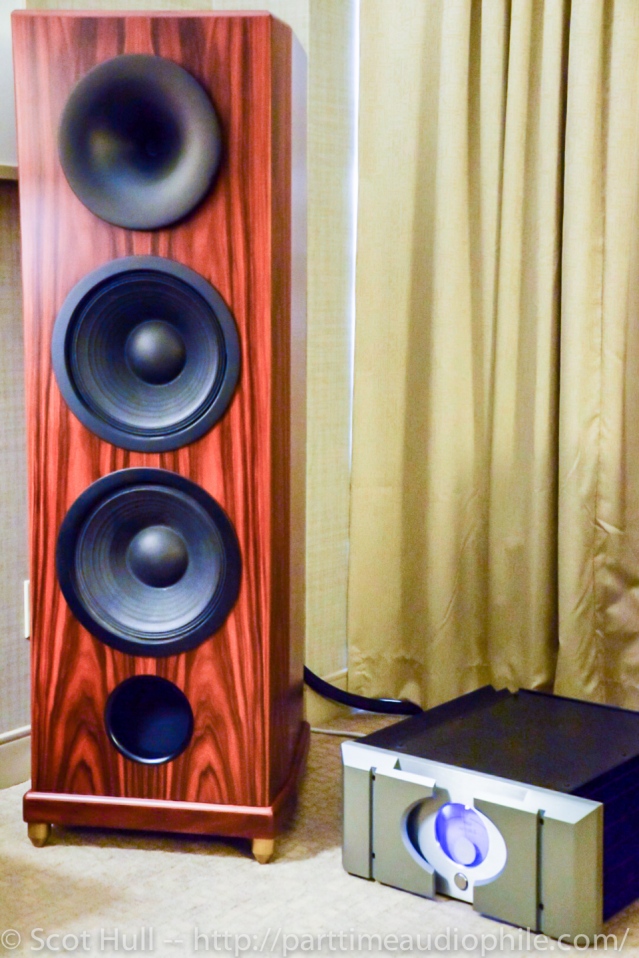