By day I’m a mild-mannered consumer electronics developer. By night, I’m a rabid personal audio enthusiast. And for 360 days a year, I have no problems switching hats at a moment’s notice to keep my alter ego separate from my true identity, respectively.

But once a year, at the International Consumer Electronics Show, everything breaks down into a singular and swirling hot mess of unadulterated geek love. My two worlds collide in the grandest of bazaars featuring 3,600 exhibitors packed into 2.2 million square feet of exhibition space that is visited by over 170,000 industry professionals (which includes all of you who have no business being at an industry-only event but somehow scammed passes anyway, tsk tsk).

I know those numbers are on a scale that is difficult to appreciate, so let’s bring them down to a more relatable level. Imagine the best high-end audio show you’ve ever been to… that legendary one that people still talk about to this day… the one where everyone and their mothers were there… got it? Now multiply that by a factor of 20. That is the bacchanal that is, was, CES 2015.

Superlatives and statistics aside, I’d like to point out something that is of major importance to all of us in personal audio: more than any other year in recent memory, 2015 is going to be a true breakout year for personal audio. 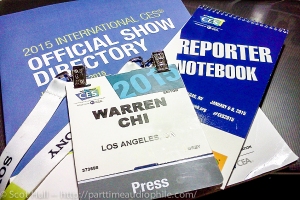 Those of us lucky enough to be in-the-know, like my CES travel mates Brian Hunter (Audio-Head.com) and Ethan Opolion (Audio360.org), have been getting sneak peeks all throughout 2014. For us, CES represents not so much an unveiling of gear, but a cathartic unshackling of NDA constraints and press embargos. CES granted us liberation, finally allowing us to share in the joys of oogling over some new gear with you – like JH Audio‘s Layla and Angie, Audeze‘s EL-8, Chord‘s Hugo TT, and HiFiMAN‘s HE1000 – just to name a few.

Of course, we’ll be covering those CES exhibits and much more here at The Audio Traveler‘s coverage of CES 2015. But as you peruse the CES coverage both within and outside of Traveler, please know that all of what we are about to present is the very tip of the proverbial iceberg. This year, MMXV, is a year of jubilee in personal audio.

That said, let’s kick off our journey forward with a quick look back at whence we came ….

I often joke that there is a concurrent event to CES known as the International Flu Strain Convention. While entirely unofficial, this “event” is still very real to many of us. Please take a moment to consider that 45,000 of those in attendance are from outside the United States – that’s approximately 1 in 4 attendees. And a decent percentage of them hail from the same exotic places that news networks like to mention whenever they’re reporting on epidemics. The result is often a mass outbreak of suffering and bodily fluids that, at least in terms of quantity, would’ve made Cortes faint.

I was hit hard two years ago, with a debilitating 105ºF fever, aches in places I didn’t even know I had, and a cough that I can only describe as Satan’s Emphysema – which, over time, morphed into a wonderfully robust bacterial pneumonia. Yum! I was out of commission for nearly six weeks. Last year, my fellow Part-Time Audiophile contributor and partner at Audio360.org, Michael Mercer, got hit pretty hard too. He was down for the count for three weeks. Thankfully, at this time, five days out from the close of this year’s show, I’m feeling terrific! Mercer isn’t quite as lucky though, having been hit for the second year in a row.

That said, this year’s most dramatic tale of personal risk comes to us from Mr. Tyll Hertsens of InnerFidelity. The story of what happened to him trumps us all, by far. And though we can marvel at it now – relieved that he is safe if not sound (just kidding Tyll) — we were all very worried and concerned for him during the show. I’m not going to get into any details, not here, not now, as it’s Tyll’s tale to tell. But as a heads up, keep your eye on InnerFidelity, there’s a good story coming out soon.

Anywho, my point in mentioning all of this? I just wanted to take a moment to salute my fellow audio press brethren, for risking both life and lymphatic systems to bring you CES coverage.